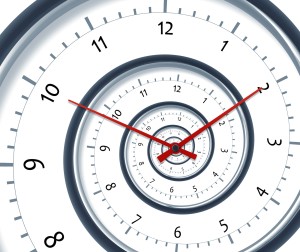 Is it possible for man to master time? Music is a temporal art par excellence, therefore time plays an essential role in the creation of a piece of music. In our effort to understand time we divide it and subdivide it into units that lie within the lifespan of a human being. As ephemeral as we are, our units are rather short: seconds, minutes, hours, days, years, decades, etc., and practically all musical compositions written to date last anytime between a few seconds to a few hours (with one notable exception: the John Cage Organ Project in Halberstadt, Germany, which will last for 639 years). This, however, hasn’t thwarted our attempts to achieve transcendence. We have sought immortality by building pyramids, writing books and composing symphonies; creating works of art that survive the test of time and transcend human life. All of this would be futile, of course, were we not capable of giving birth to new generations and sharing our knowledge with them. But humankind hasn’t stopped there; some of us have refused to accept mortality altogether and have placed our belief in an immortal soul; a matter of faith that would merit a separate discussion by itself. That aside, over the centuries man has shown his desire to prevail over time, and in the process he has realized, time and over again, his insignificance in the overall scheme of creation. Personally, I would not be discouraged by this realization; we might have virtually no impact in the life cycle of a supernova, but we can still have a great impact on the life of another human being.

Time is a difficult concept to grasp. We perceive the passing of time but that is no guarantee that time is indeed passing. We conceive time as a linear succession of events that cover past present and future, but we have no certainty that time is indeed linear. The moment we think about the future, we are already in the future; the moment we talk about the present we are already talking about the past. In a way, time is a frame from which we can’t escape, but our imagination has allowed us to by-pass this barrier and create temporal worlds of our own of which we are masters and commanders.

In theater, film and literature the creators are capable of telling a story from beginning to end or from end to beginning. Seconds can last minutes and centuries may be compressed into just a few pages. This power to manipulate time is not as explicit in purely musical forms. Can we actually start a symphony from the middle? We could certainly take a few measures from the middle and play them at the beginning, but how do we convince our listeners that those first measures are not the beginning of the piece but rather the middle? Moreover, once we come to the middle of the piece their reaction will most likely be “oh, I have heard that before, this was at the beginning of the piece”. If you start a story with a grown up man and toward the middle of the film you show that same man as a baby, we know immediately that we have gone back in time. Not so with musical themes. I’m afraid that no matter how much effort we put into it, the first sounds of a piece will always be considered the beginning.

You may be asking why this is important. The manipulation of time is rarely taught as a separate concept at conservatories; it is a given. Western music has always placed great importance to the beginning of each piece. In the Baroque era, when polyphony was the most esteemed compositional device, composers played frequently with the displacement of time. Of all the techniques they used, the Canon is the one that exemplifies this most clearly.

The canon is a masterful combination of circular and linear time. Circular because the harmonic structure of a canon repeats itself in cycles, and linear because there is only a single melody all throughout, but it is perceived as many melodies simply because the melody has been displaced in time. It is the equivalent of juxtaposing the still images of a man in motion and getting, as a result, a man with several limbs, like Leonardo Da Vinci’s Vitruvian man (this drawing was made to illustrate proportions, but it serves to illustrate my point as well).

Later on, Beethoven set a new ideal and composers started to create large works out of small musical cells, such as the motif; thus the motif became the seed from which a large symphonic work could sprout. We would watch it unfold gradually in time, as if witnessing the growth of a living being, because every time the motif came back it would be slightly transformed, albeit always recognizable. This recurrent motif would provide us with a connecting thread that would establish a solid link between past and present and which would remind us that the work we were listening to had its origins at a singular point in time.

So although composers can’t travel in time as easily and explicitly as filmmakers, writers or playwrights, we do share with them the capacity to generate a static state of time, and it is here that the inability of absolute (abstract) music to portray reality in a literal sense can turn to our advantage. As Heidegger would put it, there are three ecstasies of temporality: past, present and future. Our future plans influence our present decisions as much as past events determine our present situation. When writing a score, all ecstasies of temporality interact with one another and the final product is the result of a creation process that takes place in a, sort to say, static time zone. At first the work must be composed note by note, but once it is complete, our minds will allow us to travel from any point to any other point in time within the universe of that specific composition. Once we grasp a temporal work of art we can travel within its universe at the speed of thought. This is possible for a composer who knows his work by heart, but what about the listener?

Before going there, let me clarify the concept of stasis in music. When talking about this concept, perhaps Morton Feldman or Javanese gamelan music might come to mind. But this is not what I am talking about. I am not referring to music that appears to be static (which is anyway an illusion, since movement is required to produce vibrations and vibrations are perceived by us as sounds), but rather to the perception of time. Time and the way we perceive time it are not one and the same. Our perception of time may vary drastically depending on the situation; under certain circumstances a few seconds may appear to last forever and a couple of hours might feel like a few minutes. Of course we need a point of reference in order to coordinate our timetables, and that point of reference is independent of our perception, but when we listen to a piece of music, the passing of time will not be perceived by everyone in the same way. As a result, although a composer may have control over the succession of events within his piece, he won’t be able to control the way it is perceived. The Universe he has created will enter the field of perception of another human being, and once that happens he must surrender sovereignty. So going back to the role that the listener plays in all of this, the capacity to perceive a piece of music as static requires the listener to know and recreate every passage at any given time, which is achievable through repeated listening. The same is true for the other arts.

Let’s think of a book, we know the whole story is contained within it and we can jump to any page at anytime and therefore travel through that universe where past, present and future coexist. When looking at a DVD we are looking at the whole movie simultaneously, so in order to unfold it in time we need to watch it first from beginning to end. A musical score is no exception to this rule, but its abstract quality gives it an added advantage. A story line must have a series of events arranged in chronological order. It does not need to be told in chronological order, but there must be a temporal line underlining the whole story. In a musical score the story line does not require a beginning or an end, in fact there is no need for a story line at all, just a succession of events that have been organized by a composer. Some composers have chosen to emulate literature; the “tone poem” for example, is based on extra musical elements. But when a piece of music is based solely on sounds, time unfolds simultaneously although it is perceived chronologically. In other words, the piece exists first as a whole in a purely abstract realm, but in order to be perceived, it must be listened to.

Even if man is incapable of mastering time, he can surely master the way he perceives it. And what is time if not just an ontological necessity? For all we know, it may not even exist, but this is something I am not concerned with. As a composer I am mostly interested in our perception of time, and this perception is what makes it possible for music to exist.

My name is Jimmy López Bellido and I am a composer. I was born in Lima, Peru 40 years ago and I have lived in several places including Miami, Helsinki, Paris, and now Berkeley, California. The decision to open a blog stems out of a personal need to voice my views on the situation of the contemporary composer in our world today. Through my words, I hope to spark constructive discussion on issues relevant to the aforementioned topic. I invite you to participate by expressing your thoughts and opinions and to visit my website, at www.jimmylopez.com Welcome!
View all posts by Jimmy López Bellido →
This entry was posted in Composing and tagged absolute music, canon, John Cage, Martin Heidegger, Morton Feldman, motif, music composition, perception, Time, tone poem, vitruvian man. Bookmark the permalink.