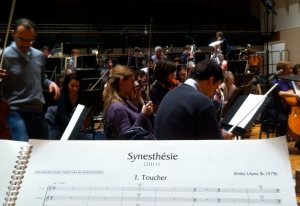 November 19, 2012 in the morning. The recording session is about to begin.

Who can resist an invitation to Paris? Not me, for sure. Having lived at the Cité Internationale des Arts for almost a year between the fall of 2009 and spring of 2010 and having had a wonderful experience, I was ready to go back at the first opportunity. It turns out that opportunity showed up earlier than expected.

In November 2010 Marc-Olivier Dupin, then Music Director of Radio France, asked me to write a ten-minute long orchestra piece for the Radio series “Alla Breve”. Composer Marc-André Dalbavie, with whom I had worked at the Paris Conservatoire,  recommended me, and his recommendation resulted in this commission.

I started to work on the piece in the summer of 2011, completing it by the end of that same year. The title, “Synesthésie” (Synesthesia) refers to a condition in which a person experiences unusual connections between senses. A color, for example, may evoke a particular sound and a flavor might bring to mind a geometric form. I chose this title because the commissioner had very specific guidelines for the piece in terms of structure and duration: it had to be divided into five separate movements of two minutes each. This format was extremely challenging because I usually let the musical ideas determine the duration of a movement, but this time I had to conform to a very clear model, so I tried to find a concept that would allow me to create five separate entities that could enjoy a strong connection while maintaining their independence. After much thought I realized that our five senses, albeit separate, are in constant interaction, and even more so in the case of those individuals who have synesthesia.

Each movement is named after a different sense, starting with touch and ending with vision. I decided to conclude the piece with “Vision” because this word also implies a state of revelation where all the elements come together, bringing the piece to a unified close. This was also the largest orchestral ensemble I had written up to that moment, so it allowed me to utilize instrumental combinations I hadn’t fully explored before, especially in the woodwind section. Each movement exploits the resources of a different instrumental group. Toucher (touch), the first movement, utilizes skin percussions. Odorat (smell) focuses on the strings. The woodwinds are prominent in Goût (taste), and the brass and metal percussions shine in Audition (hearing). Finally, all instrumental groups come together in Vision, the fifth and final movement. While writing this piece I had in mind the great French masters of orchestration such as Ravel and Debussy, who had greatly influenced me during my formativeyears. Another French composer whose influence has been very strong is Gérard Grisey, although this is not immediately apparent in my music.

Little did I know that after completing the piece in late 2011, I would still have to wait for almost a year to have it performed. But I was extremely happy when I got confirmation that the recording session was going to take place on November 19 with the Orchestre Philharmonique de Radio France under the direction of Pierre-André Valade. It was definitely worth the wait. Not long after receiving confirmation I had already booked my tickets and hotel room, ready to go back to La Ville-Lumière.

When the day finally arrived I was overjoyed with excitement. I got early to the rehearsal hall, took a seat and waited for the musicians to arrive. I was then introduced to conductor Pierre-André Valade who, besides being an excellent conductor and an incredibly charming and approachable person, didn’t have any reservations in telling me how much he had enjoyed studying the piece and how much he looked forward to recording it. From that moment on I knew “Synesthésie” was in very good hands.

The recording session started at 10am and ended around 4pm. Everything flowed with ease and I was really happy to notice the level of commitment and professionalism with which Pierre-André, the musicians and studio technicians worked all day. The day after the recording I was interviewed by Anne Montaron at La Maison de Radio France where I gave a little more detail on the piece. I stayed for a couple of more days in Paris with my partner, visiting old friends and touring the main city landmarks. I do hope I will have a reason to go back soon, although, who needs a reason to visit Paris other than the city itself? I return home full of energy with the satisfaction of having accomplished what I had set out to do two years ago when I first received this commission.

“Synesthésie” is scheduled to be aired on Radio France from December 3 to 10, 2012. It will be also available for streaming from the Alla Breve website.

My name is Jimmy López Bellido and I am a composer. I was born in Lima, Peru 40 years ago and I have lived in several places including Miami, Helsinki, Paris, and now Berkeley, California. The decision to open a blog stems out of a personal need to voice my views on the situation of the contemporary composer in our world today. Through my words, I hope to spark constructive discussion on issues relevant to the aforementioned topic. I invite you to participate by expressing your thoughts and opinions and to visit my website, at www.jimmylopez.com Welcome!
View all posts by Jimmy López Bellido →
This entry was posted in Miscellanea and tagged Alla Breve, Anne Montaron, Cité internationale des arts, five senses, hearing, Marc-André Dalbavie, Marc-Olivier Dupin, Orchestre Philharmonique de Radio France, Paris, Pierre-André Valade, Radio France, smell, Synesthésie, synesthesia, taste, touch, vision. Bookmark the permalink.