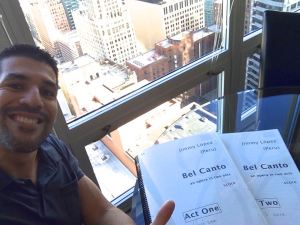 This is it, ladies and gentlemen. Bel Canto has made its final transition from book to opera. Practically 5 years after the World Premiere Announcement, 14 years after Ann Patchett’s riveting novel was first published, and 19 years after the real events on which it is based took place, this unique and oh-so-relevant story will be seen on stage for the first time. The dates: December 7, 10 & 12, 2015 and January 5, 8, 13 & 17, 2016 at the Civic Opera House, home to the Lyric Opera of Chicago.

I don’t think I exaggerate when I say that Bel Canto is one of the most awaited opera events of the year. The expectation surrounding it is at an all-time high and Lyric Opera has made a remarkable job in nurturing and now promoting this show. I’ll be in Chicago for the next three and a half weeks supervising the final phase of its transition to the stage, but I’ve already had the privilege of attending the first two weeks of rehearsal (Oct 26-Nov. 8) and during that time I witnessed the devotion and passion with which our wonderful cast is bringing our characters to life. What was most striking though was having the opportunity to see director Kevin Newbury in action. 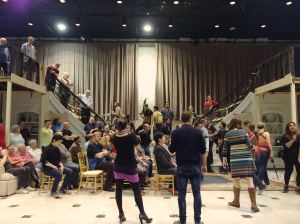 Director Kevin Newbury (center right) in action at the set of Bel Canto.

Kevin directs with surgical precision but he never comes to rehearsal with fixed ideas; instead, he comes armed with and arsenal of possibilities which he tries over and over during the course of rehearsal, never resting until he is satisfied. His collaborative approach gives enough creative liberty to the actors so that they too are able to contribute to the storytelling, thus bringing the best out of everyone involved. As a composer, I am used to working in the solitude of my studio, so watching Kevin create in front of everyone’s eyes is particularly fascinating to me. He had already earned my respect throughout our countless work meetings in the past few years, but there were moments during rehearsal which left me in complete awe. There was one particular rehearsal when we were going through the third scene of Act I and, all of a sudden, Kevin came up with an idea that neither Nilo nor I had envisioned at all. There is plenty of dialogue and music in that section so it never occurred to me that it necessitated anything else, but by recontextualizing that particular passage, both, words and music, were elevated to a completely different level. Everyone in the room felt the magic, because there’s no other word to describe it properly. I won’t give it away, but I will tell you to look for Alfredo’s aria: “We are not temporary warriors” on Act I, Sc. 3. It is simply chilling.

Another highlight were our first two rehearsals with the Chicago Lyric Opera Orchestra. Never in my life have I spent so many years writing so much music without having the possibility of listening to it! I may spend many months working on an orchestra piece, but I know that I will be able to listen to it just a few months after delivering the final score. With Bel Canto it has been completely different and on Wednesday, November 4, three years after I first sat down to write the first notes, I listened to the music being played for the first time ever. That music had been living in my head (and in some ghastly MIDI versions) all this time, so you can imagine the excitement that I felt. The orchestra is simply remarkable and saying that Sir Andrew Davis knows the score inside out would be an understatement. Not only has he diligently studied and internalized every measure; he has been a witness of the whole creative process. 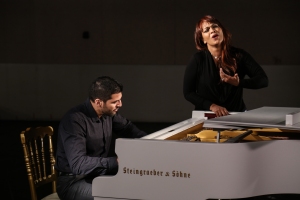 Danielle de Niese and I recording Roxane Coss’ first aria: “You Were Destined to Come Here”.

Sir Andrew recently said during a fundraising dinner that there is no other example in history in which composer, librettist, director, conductor, and curator had worked so closely and for such a long gestation period. He is actually right; normally you would have the composer and librettist working very closely in the creation of the piece, then the director would come a few weeks prior to opening night to begin with stage rehearsals, and finally, the conductor would join to supervise both stage and orchestra rehearsals. Curators and/or producers are rarely involved at all. Bel Canto is unique in that Renée Fleming, our curator, originated the whole project out of her love for Ann Patchett’s book. She and Sir Andrew Davis set out to find a composer, and then, once I was on board, all of us began to search for a librettist. Kevin was our final piece in the puzzle (and what a brilliant piece it is!). The five of us have been working together for years and by now our bond has transcended work and become friendship. Even our diva, superstar soprano Danielle de Niese, who is not only an outstanding singer but a remarkable actress and team leader, has been actively involved for the past two and a half years to the point that we held a workshop exclusively for her about a year ago. In other words, what you’ll see on opening night will be a finished, polished product and the result of years of cooperation. This show has been sketched, written, rewritten, workshopped, cut, expanded, teched, and revised numerous times already, and although there is always room for improvement, you can be sure that we have taken care of every single detail. Our team is complemented by a wonderful group of designers who are household names in the world of opera: stage designer David Korins, costume designer Constance Hoffman, lighting designer Duane Schuler, and video projection designer Greg Emetaz.

In preparation for opening night, Lyric has organized three events: a chamber music concert on November 8, a public conversation with Renée Fleming and Ann Patchett on November 18, and a discussion panel with the creative team, which is scheduled for December 2. The first of these events took place at the Chicago Cultural Center and in the words of an audience member it was “a transfixing experience”. Rarely does a composer have the luxury to curate and present a program of his own design, so I was thrilled when Cayenne Harris, Director of Lyric Unlimited, invited me to do it. The program included works by other composers who have had a great influence on me: Bach’s “Fugue” from the Sonata for solo violin No.1 in G minor BWV 1001 in transcription for viola, Stravinsky’s suite from “The Soldier’s Tale” in its version for trio, and Gerard Grisey’s “Talea”. In addition to these I presented three of my own compositions: Warped Symmetry for solo flute, K’asa for violin and piano, and Of Bells and Broken Shadows for cello and piano. Having the opportunity to present this concert was already remarkable in itself, but working with the musicians was an added bonus because most of them are members of the Lyric Opera Orchestra, so this was an excellent opportunity for us to get to know each other in a more intimate context and not just during orchestra rehearsals. As I said in my introductory remarks from the stage, all orchestra musicians and musical guests who graced us with their artistry that day deserve a major applause. I knew I was pushing the boundaries when programming some avant-garde works like Talea, so you can imagine my joy and relief when I found out that the audience had, in fact, greatly enjoyed every single piece in the program. I don’t know if this is going to happen any time soon again, but curating a concert like this was so much fun and so rewarding that I can’t wait to do it again!

Lyric Opera has undergone a great transformation under the leadership of its current General Director, Anthony Freud. It is he together with Lyric’s former President and CEO, the late Ken Pigott, who brought Renée Fleming to serve as Creative Consultant, and it is he who embraced the idea of commissioning a new work for the main stage, something that Lyric hadn’t done in over ten years. This is a momentous production and an important one in the history of Lyric and the city of Chicago. Everyone involved in it is giving their all to make this an unforgettable experience for the audience. You might not hear much from me in the next couple of weeks, and that’s a good sign, because it means that I’ll be fully immersed in rehearsals. This is why I wanted to take the time to write this blog entry today, so that you could all feel and share the excitement that we are experiencing at this very moment. This is an opera of firsts: my first opera, Nilo’s first opera, Renée’s first opera as creative consultant and, surprisingly, the first time that Sir Andrew Davis will conduct an operatic world premiere. The most experienced member of our team is Kevin, who has already established a name for himself as director of new opera, film, and musicals. Come to the theater with open eyes, ears, minds, and hearts and I promise that you won’t be disappointed.

And now, I must conclude this entry because the captain just announced that we must prepare for landing. See you on opening night!

My name is Jimmy López Bellido and I am a composer. I was born in Lima, Peru 40 years ago and I have lived in several places including Miami, Helsinki, Paris, and now Berkeley, California. The decision to open a blog stems out of a personal need to voice my views on the situation of the contemporary composer in our world today. Through my words, I hope to spark constructive discussion on issues relevant to the aforementioned topic. I invite you to participate by expressing your thoughts and opinions and to visit my website, at www.jimmylopez.com Welcome!
View all posts by Jimmy López Bellido →
This entry was posted in Bel Canto and tagged #LyricBelCanto, Ann Patchett, Anthony Freud, Bach, Bel Canto, Bradley Hall, Cayenne Harris, Chicago, Chicago Cultural Center, Chicago Lyric Opera Orchestra, Civic Opera House, Constance Hoffman, Danielle De Niese, David Korins, Duane Schuler, Gérard Grisey, Greg Emetaz, Igor Stravinsky, Jimmy Lopez, Ken Piggot, Kevin Newbury, Lima Crisis, Lyric Opera, Lyric Unlimited, Nilo Cruz, opening night, Renee Fleming, Sir Andrew Davis, Talea, The Soldier's Tale. Bookmark the permalink.

1 Response to This is it!